For financial professionals only

Should I trust my biases, or take advice?

After spending years thinking about it, I’ve decided that human beings were not designed to solve the riddles of retirement planning. What we are really good at is making things, gardening, keeping pets, looking after our kids and messing about. Financial planning for retirement really isn’t what we were designed to do. It confuses us terribly.

Our biases are sometimes just too strong

Take the guy who scoffs at investing in the global economy but is infatuated with buy-to-let property ownership in his hometown. He isn’t a surveyor and thinks a two-year fixed deal is a lifetime’s hedge against interest rate risk. Best not remind him that the Rent Restriction Act 1915, supposed to last until the end of WWI, was not repealed until 1989. Better to keep a friendship by applauding his success. And commiserating about ‘the tenants from hell’ rather than trying to talk about pensions.

In retirement plans based on multi-asset investment, through exposure to the global economy (rather than your local town’s), we have a lot of complex, risk-based choices to make. Our brains, however, seek simplicity.

Look at how we reacted to Pensions Freedoms. The headline message was that we had the choice not to buy an annuity. The result? Hardly anyone bought an annuity.

Was this rational? Did we make a reasoned assessment of the new choices open to us? I don’t think so. Over the next year we will see the regulator nudging everyone back to a more nuanced point of view, starting with the outputs from GC20/1 (Guidance on DB transfers) and then from Assessing Suitability Review 2 (ASR2) with its focus on whether customers are getting suitable retirement advice.

This chart shows the cost of £10,000 a year income from eight different retirement income strategies for someone aged 65. Take a look and see if your own assumptions have been confirmed or challenged. Everyone’s reaction will be different. 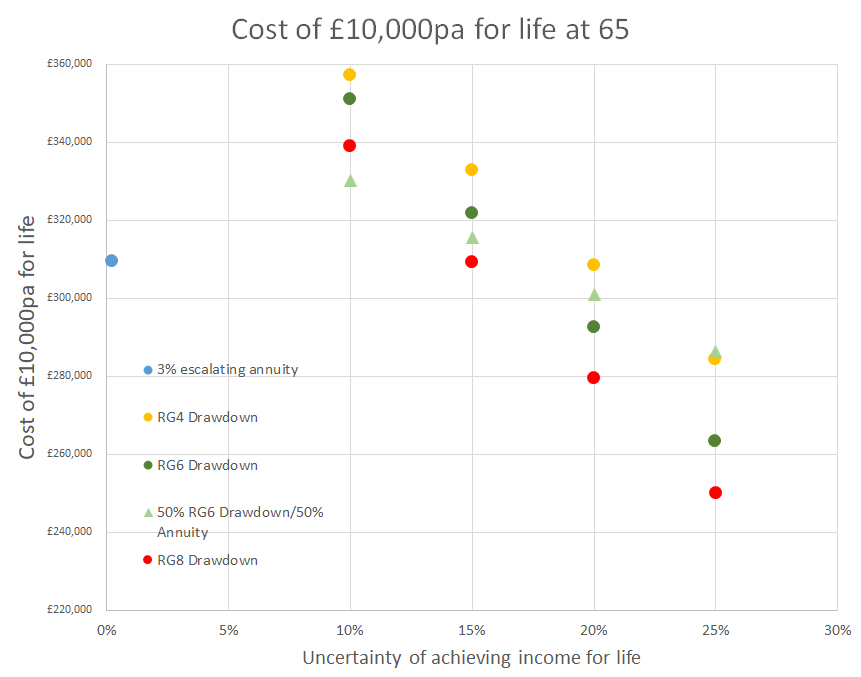 To my way of thinking, this shows three things.

I know I have my own biases and need to understand them a lot better. The prospect of better insight is what confirms to me the value of advice – not the promise of spectacular investment returns or even the certainty of my outcomes. That’s why objective retirement advice really makes sense to me.

In episode 7, I chatted with behavioural expert Dr Laura Haynes, about some of the biases that can surface when talking to your clients about their retirement – and how to navigate them for the best outcomes.

This article is for financial professionals only. Any information contained within is of a general nature and should not be construed as a form of personal recommendation or financial advice. Nor is the information to be considered an offer or solicitation to deal in any financial instrument or to engage in any investment service or activity. Parmenion accepts no duty of care or liability for loss arising from any person acting, or refraining from acting, as a result of any information contained within this article. All investment carries risk. The value of investments, and the income from them, can go down as well as up and investors may get back less than they put in. Past performance is not a reliable indicator of future returns.

Speak to us and find out how we can help your business thrive.